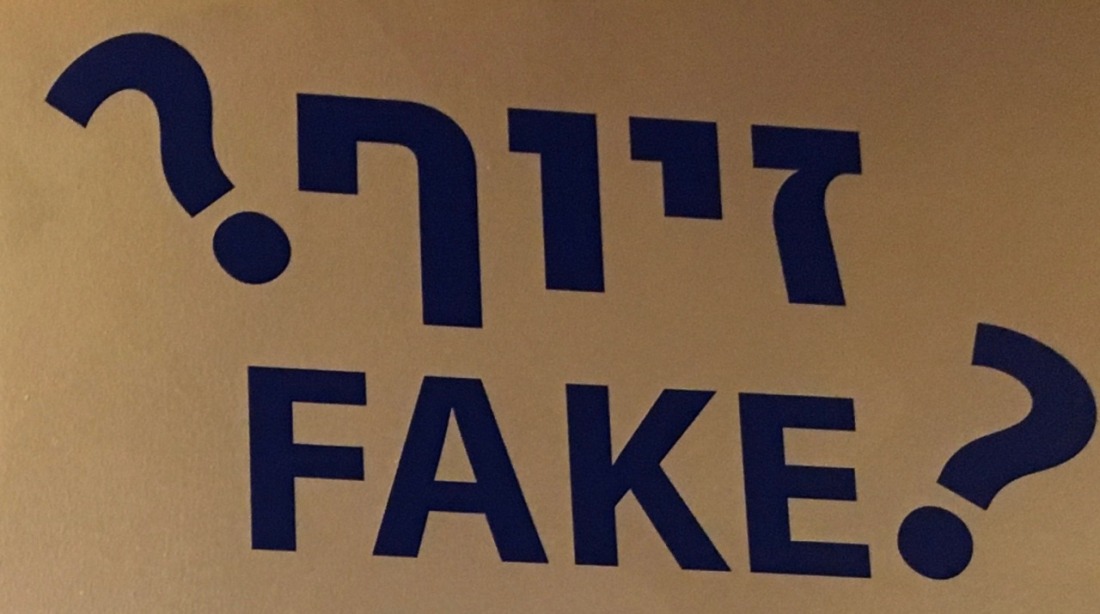 It seems an apt description of our recent presidential election, but, in fact, it’s the title of a fun exhibit at the Tel Aviv Museum of Art. On view are forgeries, fakes, and deliberate deceptions in art, archaeology, religion, literature, fashion, commercial products, and documents. (fake Modigliani heads of women below)

The heart of the exhibit rests on four phony Vermeer paintings by notorious Dutch art forger Han van Meegeren (1889–1947). In 1937, they apparently fooled the leading art expert of the time who enthusiastically endorsed them. On loan from Dutch museums, they were sold as originals to the Nazis, greatly enriching van Meegeren. After WWII, he went on trial as a collaborator, but to save himself he had to admit he had forged them deliberately to deceive the Nazis. As a result, he became a Dutch hero of sorts hailed for his artistic talent as well as for duping the Nazis. Hence the paintings today reside in museum collections in the Netherlands.

Meegeren, Supper at Emmaus above

In 1884, prolific archaeological forger, Moses Wilhelm Shapira shot himself in the head because the British Museum had just canceled a major deal with him. Several of  his fake Moabetica sculptures, which he claimed dated to around 840 BC, are on exhibit.

A section on forged passports and identity cards reveals how Mossad agents captured Eichmann even though there was a minor address error the Argentinians didn’t notice and thus the agents were able to kidnap and whisk him out of the country undetected.

Another story, perhaps apocryphal: An American art collector bought a Titian and was trying to get it out of Italy without discovery because national treasures were illegal to remove. So he paid a local artist to paint an ordinary landscape over it.  When the collector returned to the States he asked an art restorer to remove the fake. The restorer called him and said he had removed the landscape, removed the Titian, got to a portrait of
Mussolini and asked the collector, “Should I keep going?”

Fake Edvard Munch self-portrait above and more on view until February 25, 2017. See it if you are in Tel Aviv. Also noteworthy is the museum’s collection of late nineteenth and early twentieth century paintings that include Cezanne, Leger, de Vlaminck, and Bonnard gems among others (see below).

Cezanne, Houses on the Side of the Road

The Tel Aviv Museum of Art was established in 1932 and originally housed in the home of Tel Aviv’s first mayor, Mier Dizengoff.  It moved to its present location in 1971. Architect Preston Scott Cohen designed the most recent addition, the Herta and Paul Amir Building on the western side, which opened in 2011 (photos below). You can also enjoy lunch or dinner on the patio at Pastel Brasserie, a lovely French restaurant that overlooks the sculpture garden. Photos below are the exterior and interior of the museum as well as one part of a two-part mural created for the museum by Roy Lichtenstein in 1989.

To read more about the architecture: http://www.archdaily.com/137601/tel-aviv-museum-of-art-preston-scott-cohen

To read more about the museum: http://www.tamuseum.org.il/