Petersen Museum for Car Buffs and Others

Even if you’re not an auto aficionado (I’m not), one can surely find an element of oohs and ahs when visiting The Peterson Auto Museum in LA. Hard to miss the building itself: Like a crazy layer cake interspersed with red and metallic icing, the façade is wrapped in a spiraling whirl of metalwork resembling a car grill. Inside, even the stairwell appears as a vortex of chrome. 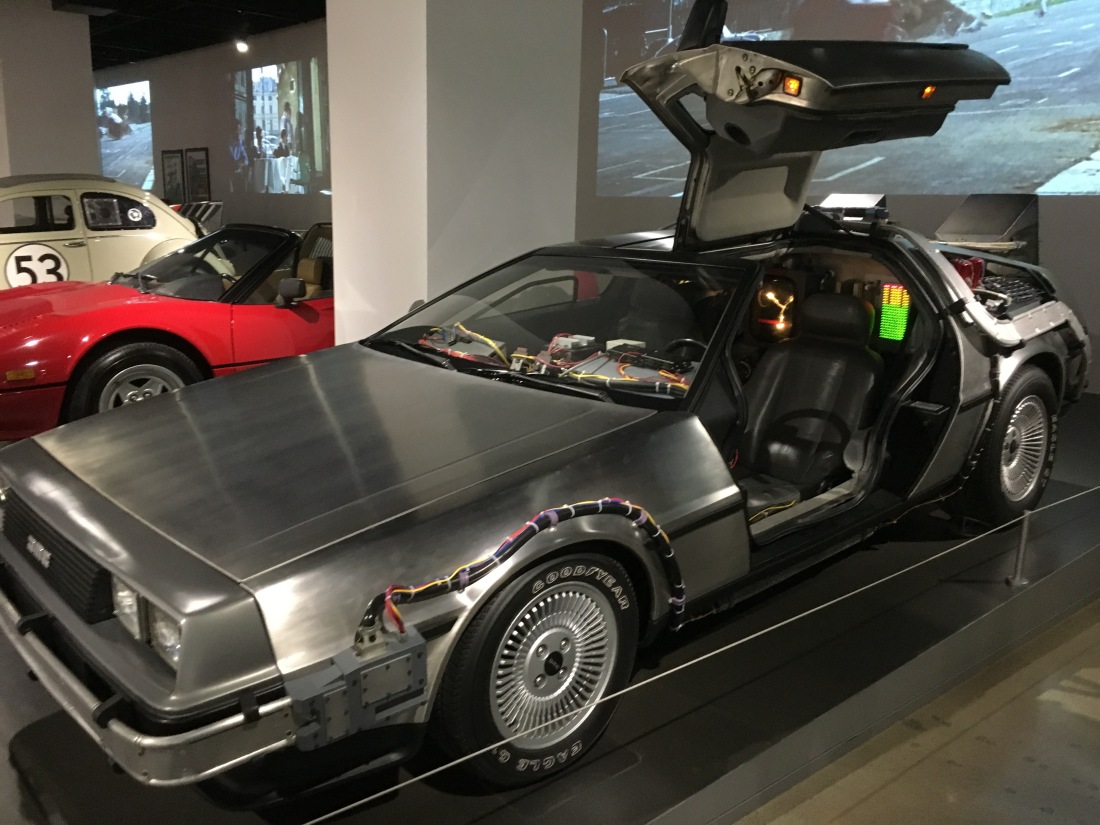 I was fascinated with the history of former celebrity-owned cars (Steve McQueen’s is there), futurist visions of transport with aircraft-inspired styling, and film vehicles such as the Winged Warrior 1989 Batmobile, Herbie the Love Bug, and the Delorean DMC12 Time Machine driven in “Back to the Future.”

Holy SideCar, Batman! Yes, TV’s 1966 Yamaha YDS-3 BatCycle is here, too. But, most of all, I loved the shiny chrome colors rarely available on current cars: metal lime green, eggplant purple, and orange ice to name a few. Polished to a high sheen, cars new and old glittered and gleamed. Three floors full. 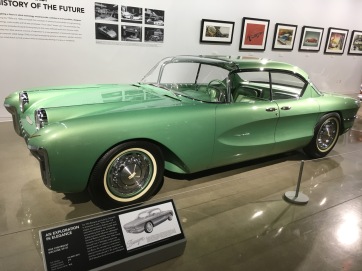 On view are antique machines that weren’t much more than an engine on a plank of wood and four wheels, grand luxury sedans of 20s 30s, and the wonderful excesses of the 50s with magnificent color and elongated tail fins. See tiny cars without any soul built in Japan and copied by Americans.

The history of the auto is unveiled bearing witness to a technologically changed world at a price almost anyone can afford, thanks to Henry Ford’s everyman car. Most clearly present at the museum is America’s love affair with being on the road in a car of choice. 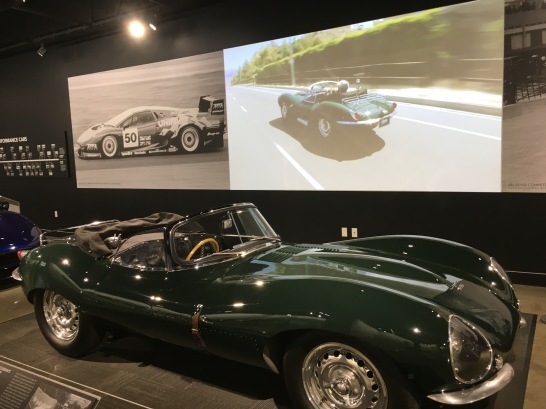 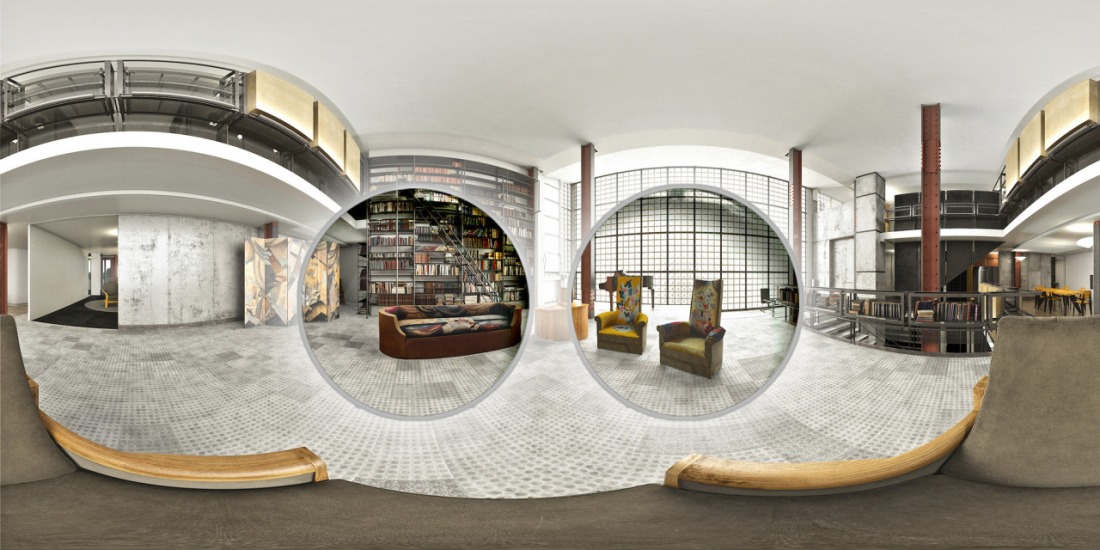 Above image from the New York Times A rendering of the virtual reality rendition of the Maison de Verre. CreditDiller Scofidio + Renfro

Having toured the actual Maison de Verre (Glass House) in Paris, I was curious to see how the exhibit could possibly compare to the ingenious interior design and workings of this 1932 home. But in using virtual reality and clever silhouette images, the exhibit is as innovative as the house was. Chareau combined industrial glass, wrought iron, and precious woods in highly original and daring ways and fine craftsmanship. Many actual furniture pieces and lighting are in the exhibit, but the other surprise was learning that Pierre Chareau and his wife Dollie were patrons of the arts. Several works by Picasso, Piet Mondrian, Amedeo Modigliani, Jacques Lipchitz, and Max Ernst are on view as well. END_OF_DOCUMENT_TOKEN_TO_BE_REPLACED

It seems an apt description of our recent presidential election, but, in fact, it’s the title of a fun exhibit at the Tel Aviv Museum of Art. On view are forgeries, fakes, and deliberate deceptions in art, archaeology, religion, literature, fashion, commercial products, and documents. (fake Modigliani heads of women below)

END_OF_DOCUMENT_TOKEN_TO_BE_REPLACED

The recent exhibition at the The Fondation Cartier pour l’art contemporain  sheds well-deserved light on the experimental Colombian photographer Fernell Franco (1942-2006) who lived and worked in Cali, Colombia.

Cali Clair-Obscur (French for chiaroscuro) is an apt title as Franco delves into the seedy side of Cali life in shades of light and dark, images he shot between 1970 and 1996. Gathered into ten different series, Franco created a film noir photo fusion of urban scenes. END_OF_DOCUMENT_TOKEN_TO_BE_REPLACED

A star photographer in his own right, he also created famous portraits of artistic and literary celebrities such as Salvador Dalí, Le Corbusier, Joan Miró, and André Malraux. But, in addition, he gave inventive life to rural southern scenes and ordinary objects—rubbish, cigarette butts, and a cracked egg among others—framing images in creative ways. And that is the unexpected delight in this show beyond beauty and fashion. END_OF_DOCUMENT_TOKEN_TO_BE_REPLACED

Far from the madness in France…perfect days in Sydney: A high school band entertains us with a Big Band Jazz
performance outdoors at Martin Place. We accidentally discover a fun Rock & Roll exhibit “What
a Life Rock Photography by Tony Mott” at State Library of New South Wales with it’s grand Ionic columns, then meander through the Royal Botanical Gardens.

We cap the day with a rousing evening concert of Mussorgsky orchestrated by Ravel, Pictures at an Exhibition, conducted by Miguel Harth-Bedoya at Sydney Opera House, still aglow in French red white and blue.

Image below from What a Life!

The grandiose is always on view in Paris, but if you crave a bit of space, want to avoid the multitudes, or have limited time, skip the Louvre where even if you had a lifetime it wouldn’t be enough. Wander a bit farther afield and you’ll discover hidden gems in neighborhoods you can explore with ease. END_OF_DOCUMENT_TOKEN_TO_BE_REPLACED