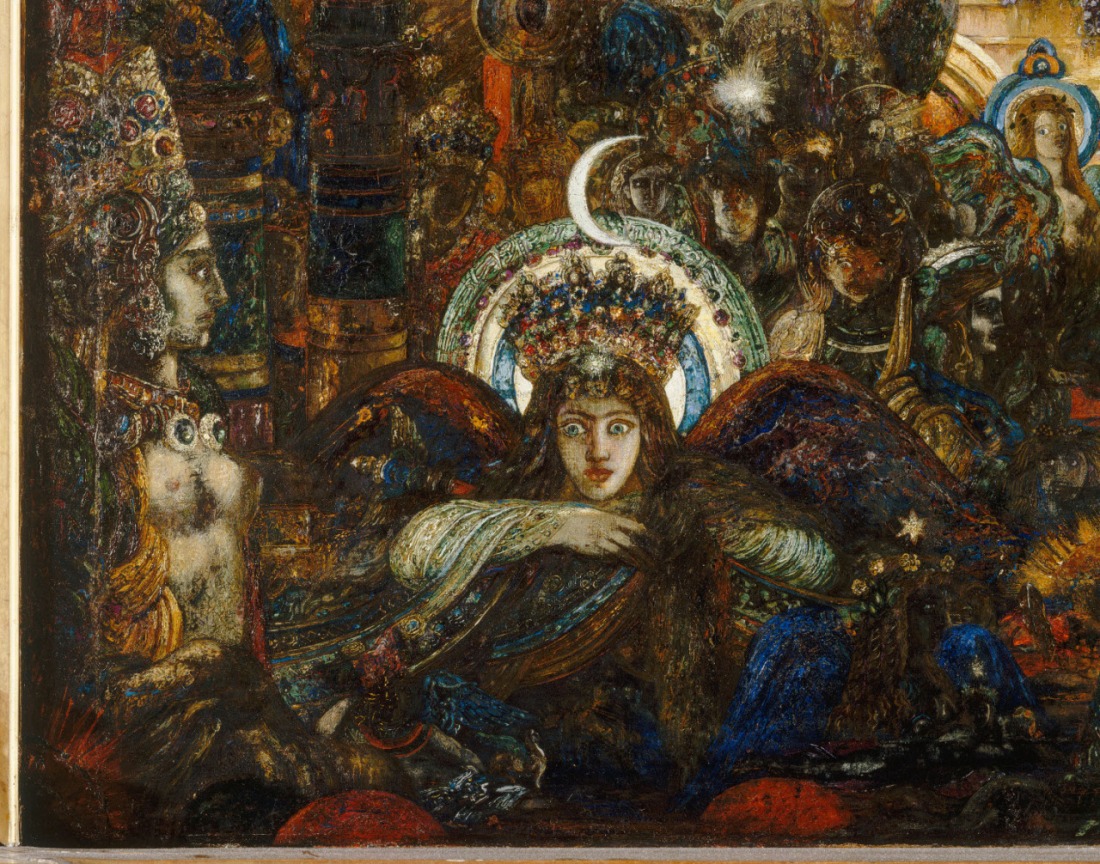 The grandiose is always on view in Paris, but if you crave a bit of space, want to avoid the multitudes, or have limited time, skip the Louvre where even if you had a lifetime it wouldn’t be enough. Wander a bit farther afield and you’ll discover hidden gems in neighborhoods you can explore with ease.

First up, in the ninth arrondissement, beyond the Grands Boulevards, the Garnier Opéra, the Galeries Lafayette and Le Printemps, you’ll find quaint quarters of private mansions first developed in the early nineteenth century—La Nouvelle Athènes and Saint-Georges, then the SoHo of artistic talent.

Musée Gustave Moreau (http://musee-moreau.fr/ 14 rue de la Rochefoucauld) is a shrine to the 19th c master surrealist painter (often called a painter’s painter). Fearful that the public would forget him after he died, Moreau meticulously recorded and arranged his life’s work as a museum before his demise in 1898, and, like Napoleon, solidified his reputation for generations to come.

Crammed wall-to-wall and ceiling-to-floor in Moreau’s former residence, the artist’s mythological, religious, symbolic, and phantasmagoric paintings and sketches give new meaning to the word clutter (ah, but such clutter you’ll not find anywhere else in Paris). Warning: After a half hour, you may feel a silent scream coming on.

If all of Moreau’s detailed sketches and pathological paintings leave you yearning for something more sedate, perhaps it’s time for a romantic treat. Stroll a tree-lined, cobblestone area just up the street to Museé de la Vìe Romantique (http://en.parisinfo.com/paris-museum-monument/71482/Mus%C3%A9e-de-la-vie-romantique, 16 rue Chaptal). You’ll enter a secluded garden hideaway with an ochre-colored, Italian-designed home. In 1830, Dutch painter Ary Scheffer settled with his family here and hosted Friday-night gatherings for Paris luminaries of the Romantic period: George Sand, Franz Liszt, Frédéric Chopin, Eugène Delacroix and Gustave Moreau, among others. Today, the museum features highlights of that period along with memorabilia from writer Sand.

Nearby both museums is Rue de la Tour-des-Dames, a quiet street worth a look-see at the sought-after elegant mansions of the era. Before leaving the 9th, you might like to wander up into the 18th and walk the colorful market streets of rue des Martyrs and rue Cadet. If you are in need of a sweet pick-me, stop nearby at Fouquet (http://www.fouquet.fr/) for handmade bonbons or chocolate.