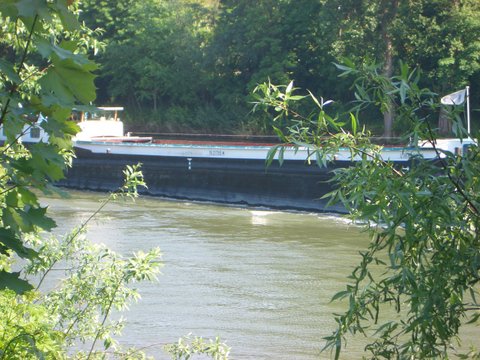 In the late 1800s, when the Impressionists painted in Paris and wanted to escape the summer heat, they cruised to rural Chatou (http://www.chatou.fr), then about an hour and a half outside the city by barge. Today, a twenty-minute train ride on the RER from Paris, Chatou offers tranquility amid an industrial rush of cars and motorbikes and grey buildings.

Although it’s not what it used to be (what is?), it is possible to imagine what it might have been. The Seine meanders alongside the town, and a small island there, known as I’Ile des Impressionnistes, can still take you back in time.

Ignore the traffic and noise as you emerge from the metro. Cross over the bridge and duck around and under it, then follow the I’Ile des Impressionnistes signs to the tiny island. You won’t quite be following in Renoir’s footsteps, but you can picnic along the river or dine in the one of two restaurants where he romped with his friends and fellow artists and, in 1881, painted “Le Déjeuner des Canotiers,” (“Luncheon of the Boating Party”). (The original is in the permanent collection of The Phillips Collection in Washington, DC.)

One of the thirty paintings Renoir worked on while in Chatou is a portrait of Alphonse Fournaise, a boat carpenter, who organized regattas. His wife, Madame Fournaise, started Restaurant de la Maison Fournaise, and his sister, Alphonsine, was a frequent model for Renoir, and is one of the famous portraits in “Luncheon of the Boating Party.”

Artists Edouart Manet, Berthe Morisot, Claude Monet, Camille Pissaro, Alfred Sisley, and Gustave Caillebotte were among the many who gathered at Chatou as well as writer Guy de Maupassant, whose short stories evoke the festive mood of the island and his own delight in rowing on the Seine. For ten years his “great and only absorbing passion was the River Seine,” but eventually de Maupassant left for Poissy complaining that the restaurant had become too unbearably over-crowded with “far too many minor society people.” One of his poems is painted on an inside wall of Restaurant Fournaise.

In 1906, Alphonsine closed the restaurant and it languished for the next 73  years until the town of Chatou purchased it in 1979. Thanks to the state and Les Amis de la Maison Fournaise and Friends of French Art, it reopened after six years of renovations that now include two restaurants and a small museum, Musée Fournaise, with a worthy collection of ceramics, periodic special exhibitions, and reproductions of “Luncheon of the Boating Party.”

Spend a lovely lost afternoon dining at Restaurant de la Maison Fournaise (http://www.restaurant-fournaise.fr/) overlooking the Seine and visualize ladies and gentlemen strolling in their finery on the quiet, tree-lined promenade below.

You might also imagine you’ve just accepted an invitation from Renoir. When he painted there from 1868 to 1884, he often invited friends to join him. Writing in 1880, he explains, “I can’t leave Chatou, because my painting is not finished yet. It would be nice of you to come down here and have lunch with me. You won’t regret the trip, I assure you. There isn’t a lovelier place in all Paris surroundings.”

And a stroll along the river’s edge after lunch may leave you with the same impression.

Conjuring up the past is sweet especially in an old-fashioned candy store. Before you leave town, stop in at Aux Friandises along the main drag. Try a handmade chocolate morsel or other temptations such as candies, teas, coffees, and gifts.